"I guess I should warn you, if I turn out to be particularly clear, you've probably misunderstood what I've said." — Alan Greenspan (former Fed chair)

Good Morning and Happy Friday! America is back baby. Back to work that is. New unemployment claims are at their lowest levels since 1969, dropping 28,000 from last week to 187,000. NYC yellow cabs will be getting busy again too as Uber reached a deal to list all New York City taxis on the app (lmao wtf?). From trying to kill the cab industry, to teaming up with it.. gotta love their happy ending. It looks like gyms are seeing a happy turn of events as well, as Americans seem to be tired of W(Out)FH. Planet Fitness has seen inflows of hundreds of millions of dollars from private fund managers, including the likes of Oaktree Capital, MidOcean Partners, and Soroban Capital Partners. Music artists are also seeing inflows after Spotify paid out "the highest annual payment from any single retailer in history" to the industry. A payment to the tune of a groovy $7 billion.

Today's sponsor, Polymarket, allows you to trade on real-life events including if BAYC NFT will have a floor of 100 ETH on April 1st.

1. Story of the Day: Pro Investors Turn to Pro Sports 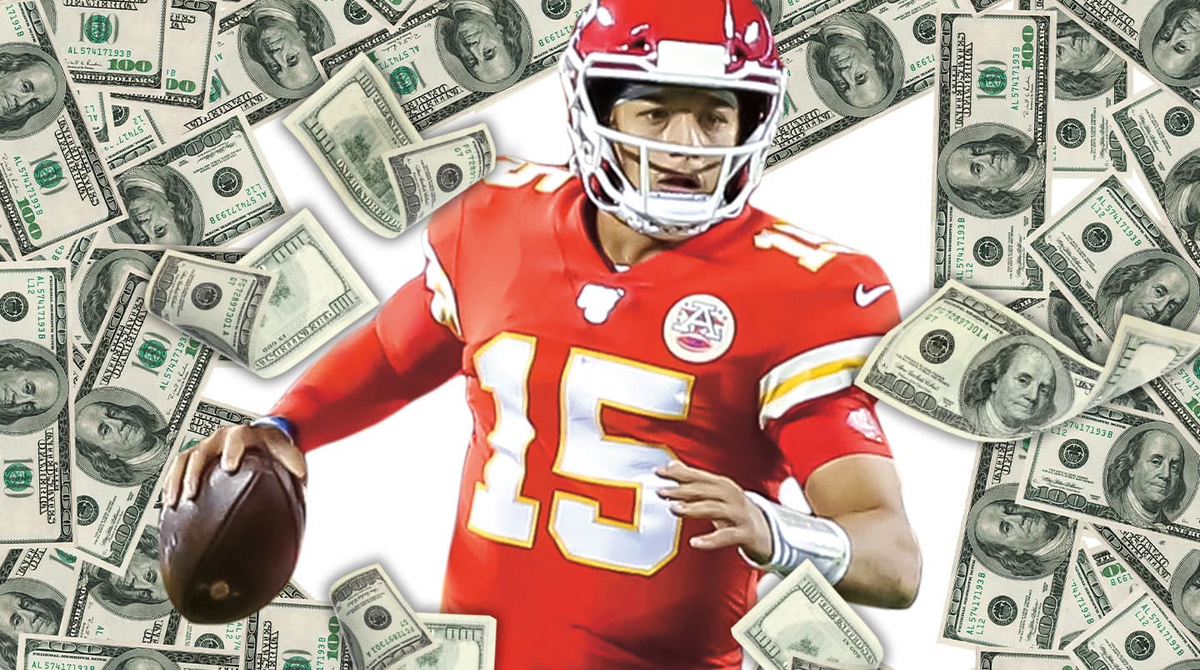 While most of us had no shot at making a living playing sports, that doesn't mean we can't make a living from sports at all. No, I'm not talking about turning your weekend gambling habit into your main source of income. I'm talking about the new trend of private equity companies investing in professional sports teams and leagues.

During the pandemic, the world of sports was decimated. Games, tournaments, and entire seasons were canceled. Audiences weren't allowed in arenas, and even after they slowly returned, players they wanted to watch were often sidelined due to COVID protocols. The industry has bounced back from those tough times, and that resilience got buyout bros excited like a bunch of baseball scouts at a high school home run derby.

Across the globe, PE firms spent $51 billion on sports transactions, with Europe being almost half of that at $22 billion. North America was playing on the Korn Ferry Tour compared to that, spending just $3 billion buying minority ownerships in franchises. Still, it's been a win win scenario, which never happens in sports. Leagues and teams received liquidity at a tough time, and funds were able to invest at attractive levels after decades of valuations going straight up.

With teams in sports like soccer.... sorry, fútbol.... constantly at risk of relegation, investors have been buying shares in the entire league, rather than specific clubs. France's Ligue 1, where Mbappe, Messi, and Neymar play, might receive an investment from CVC Capital Partners. The fund, who recently made a deal with La Liga in Spain, may get a minority stake in Ligue 1's media rights. Investors in both Europe and North America seem to agree that sports are a media rights play.

Short Squeez Takeaway: A lot of restrictions still apply to investing in sports teams. The NBA won't let institutional investors own over 20% of a single franchise for example, and the NFL doesn't let institutional investors in at all. Founder of RedBird Capital Partners, Gerry Cardinale, said, "Covid showed the resilience of these businesses even when one part of the value chain- the live event- gets turned off." This was after the Michael Jordan Flu-Game-like performance that sports teams, and sports media displayed to get out of the pandemic relatively unscathed. As an investor, you definitely hope these restrictions change, and fast.

Markets turnt up yesterday as oil prices moved lower, and investors seem to be preparing for a more hawkish Fed. Crypto markets are up as Ethereum software upgrades bode well for the industry as a whole, particularly in regards to saving energy.

A Message from Polymarket: 100 ETH Floor for Bored Apes?

Popular NFT project, the Bored Ape Yacht Club (BAYC) has had a hectic few weeks. Yuga Labs, the team behind the project, acquired CryptoPunks on March 11, and launched their ApeCoin token on March 16, which is currently sitting at a $14 billion market cap. Yuga Labs also raised a $450 million funding round, which valued the company at $4 billion.

The BAYC NFT floor price has been mooning lately as well, and crossed the 100 ETH mark once again on March 20 after prices had fallen from early February highs. Will BAYC be able to sustain the 100 ETH floor in about a week’s time on April 1st? 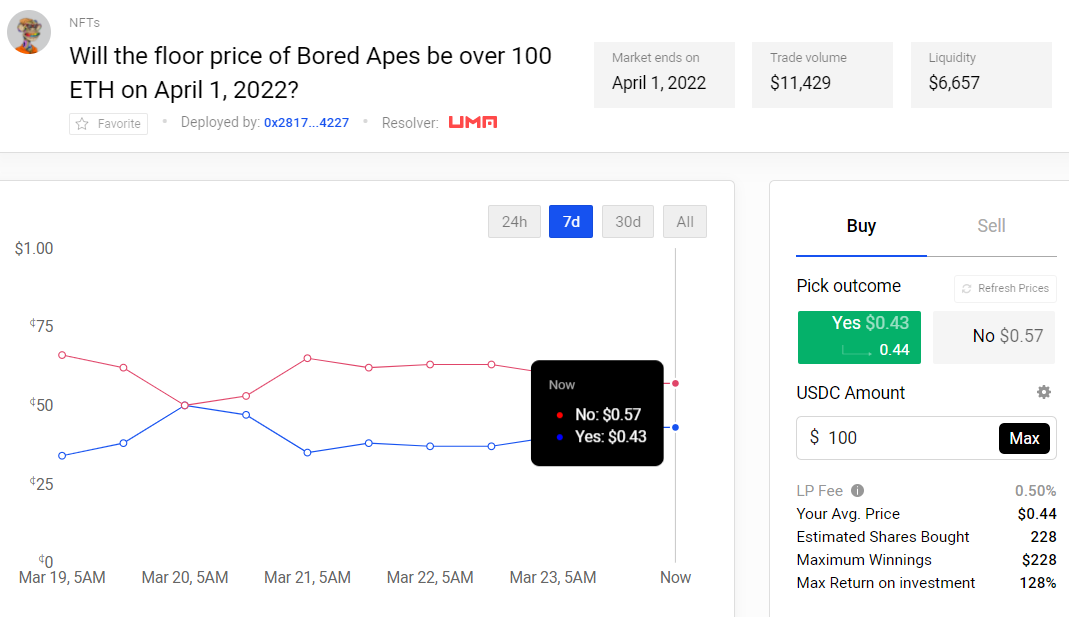 Polymarket traders are currently predicting a 48% probability that Bored Apes will be over 100 ETH on April 1st. What do y’all think? Follow the odds now on Polymarket!

4. Book of the Day: Future Minds: The Rise of Intelligence from the Big Bang to the End of the Universe 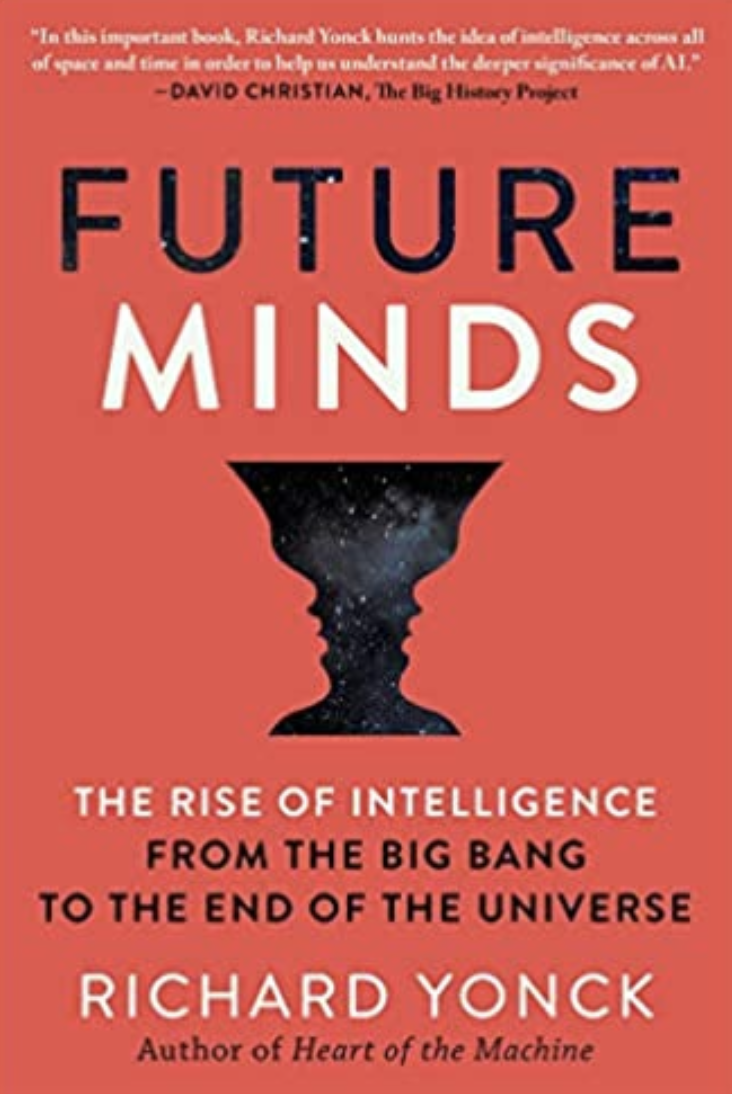 With the ongoing advancement of AI and other technologies, our world is becoming increasingly intelligent. From chatbots to innovations in brain-computer interfaces to the possibility of superintelligences leading to the Singularity later this century, our reality is being transformed before our eyes.

This is commonly seen as the natural result of progress, but what if there’s more to it than that? What if intelligence is an inevitability, an underlying property of the universe?

In Future Minds, Richard Yonck challenges our assumptions about intelligence—what it is, how it came to exist, its place in the development of life on Earth and possibly throughout the cosmos.

Taking a Big History perspective—over the 14 billion years from the Big Bang to the present and beyond—he draws on recent developments in physics and complexity theory to explore the questions: Why do pockets of increased complexity develop, giving rise to life, intelligence, and civilization? How will it grow and change throughout this century, transforming both technology and humanity?

As we expand outward from our planet, will we discover other forms of intelligence, or will we conclude we are destined to go it alone? Any way we look at it, the nature of intelligence in the universe is becoming a central concern for humanity. Ours. Theirs. And everything in between.

“Nothing can create something all the time, due to the laws of quantum mechanics, and it's fascinatingly interesting."

Cities with largest expected apartment inventory growth from 2021 to 2022 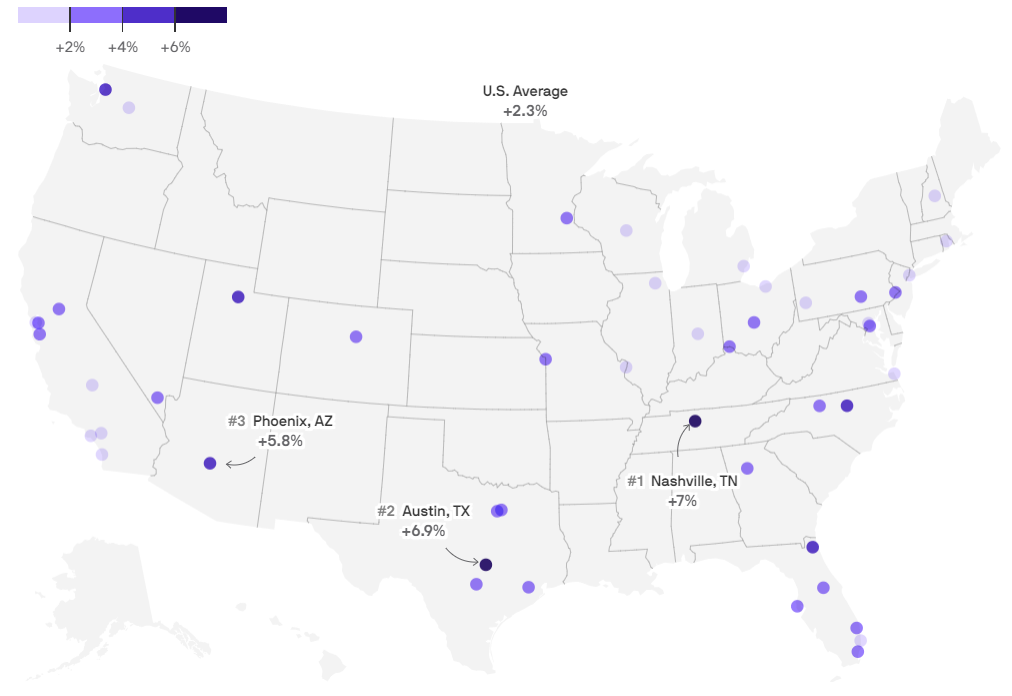 7. Daily Acumen: No Stock is Safe

The bulls may want you to believe this, but no stock is safe.

There are businesses that may remain good (earning return on capital greater than cost of capital) for some time, maybe a long time, but you must not attach infinite values to them.

This is because high returns attract competition, generally causing return on capital to move towards the cost of capital. While such companies may still earn excess returns, but the return trajectory is down.

Stick with quality (even that is momentary, just for longer moments that allows time for compounding to work its magic).

The good thing about high-quality stocks is that you can pay up for them (never overpay), expensive looking prices, and still do well till the underlying businesses remain good.

With poor quality, most probably, you have no hope.

“Over the long term, it’s hard for a stock to earn a much better return that the business which underlies it earns. If the business earns six percent on capital over forty years and you hold it for that forty years, you’re not going to make much different than a six percent return – even if you originally buy it at a huge discount. Conversely, if a business earns eighteen percent on capital over twenty or thirty years, even if you pay an expensive looking price, you’ll end up with one hell of a result.” 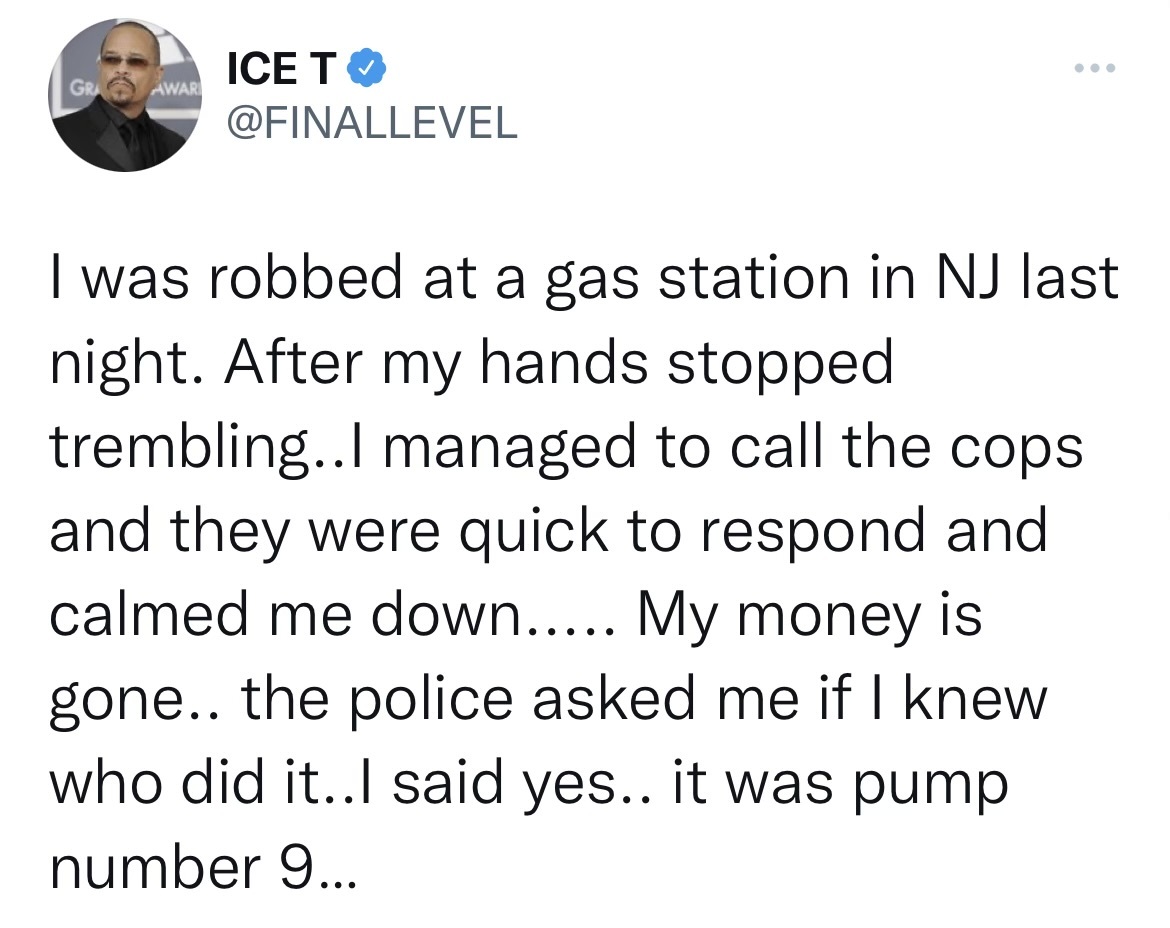 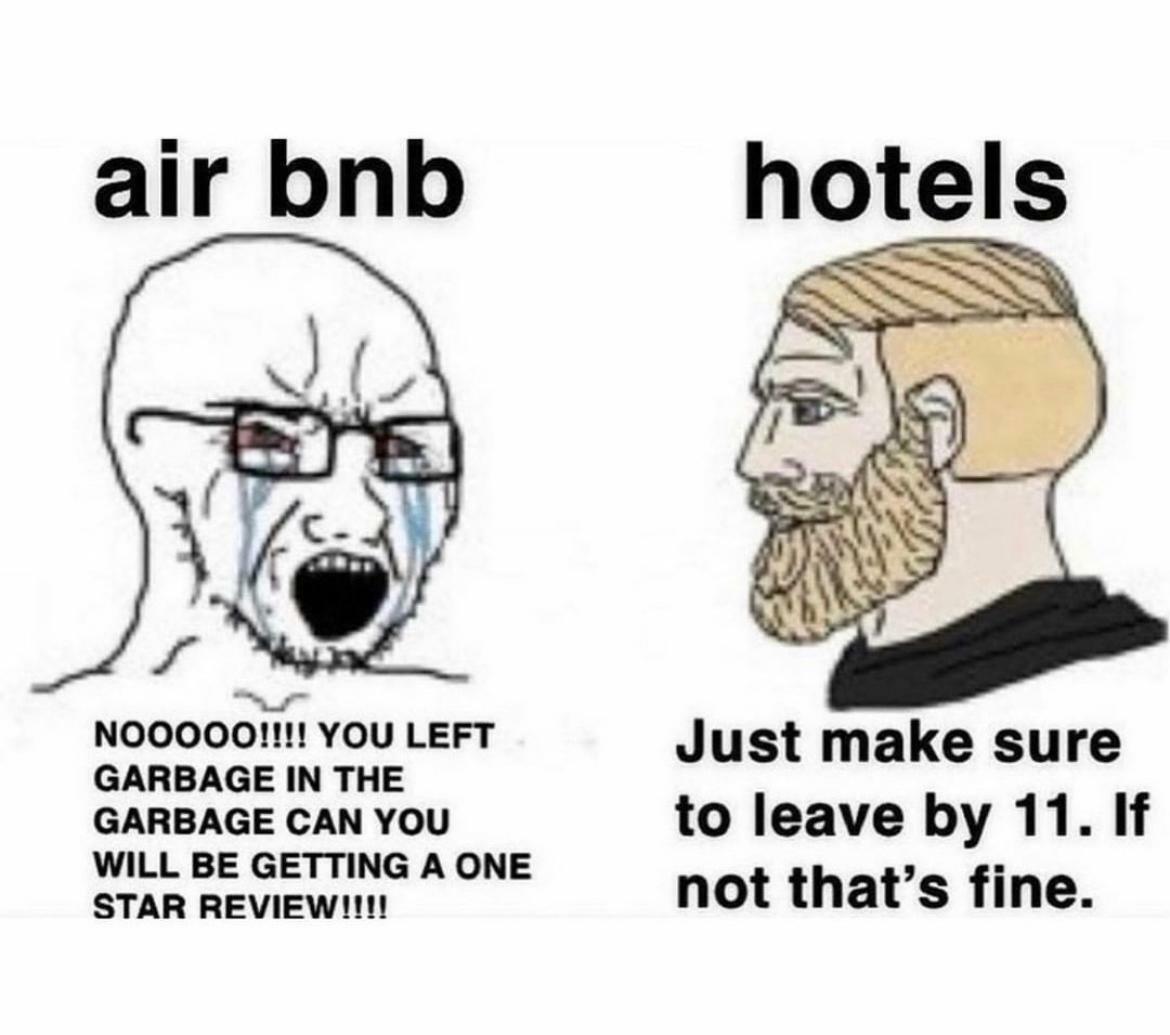 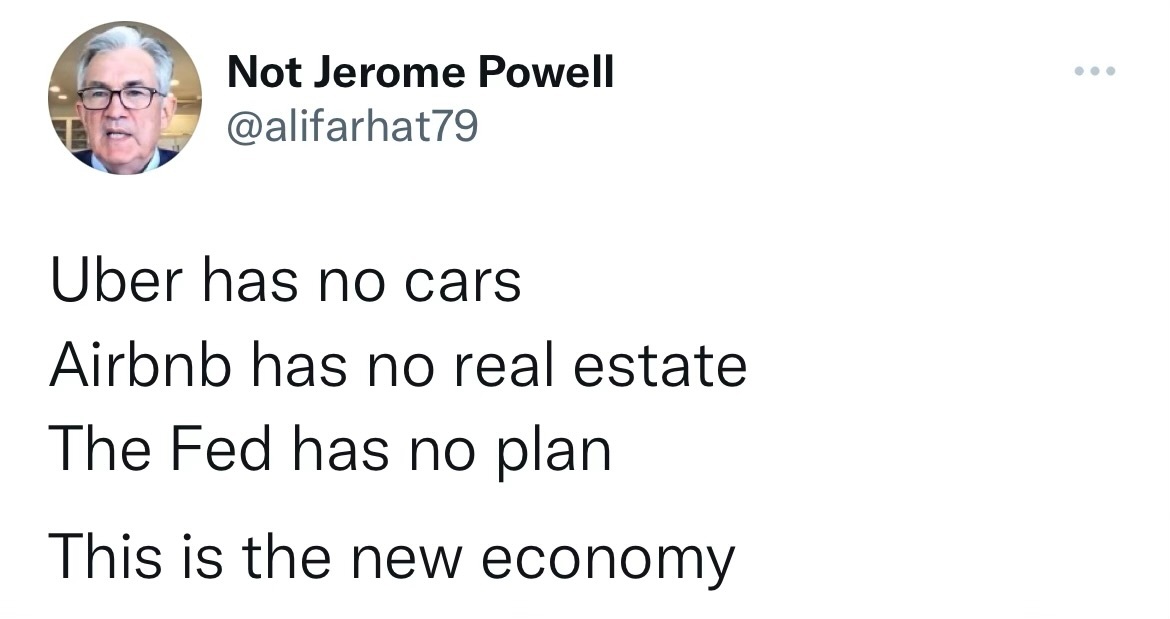 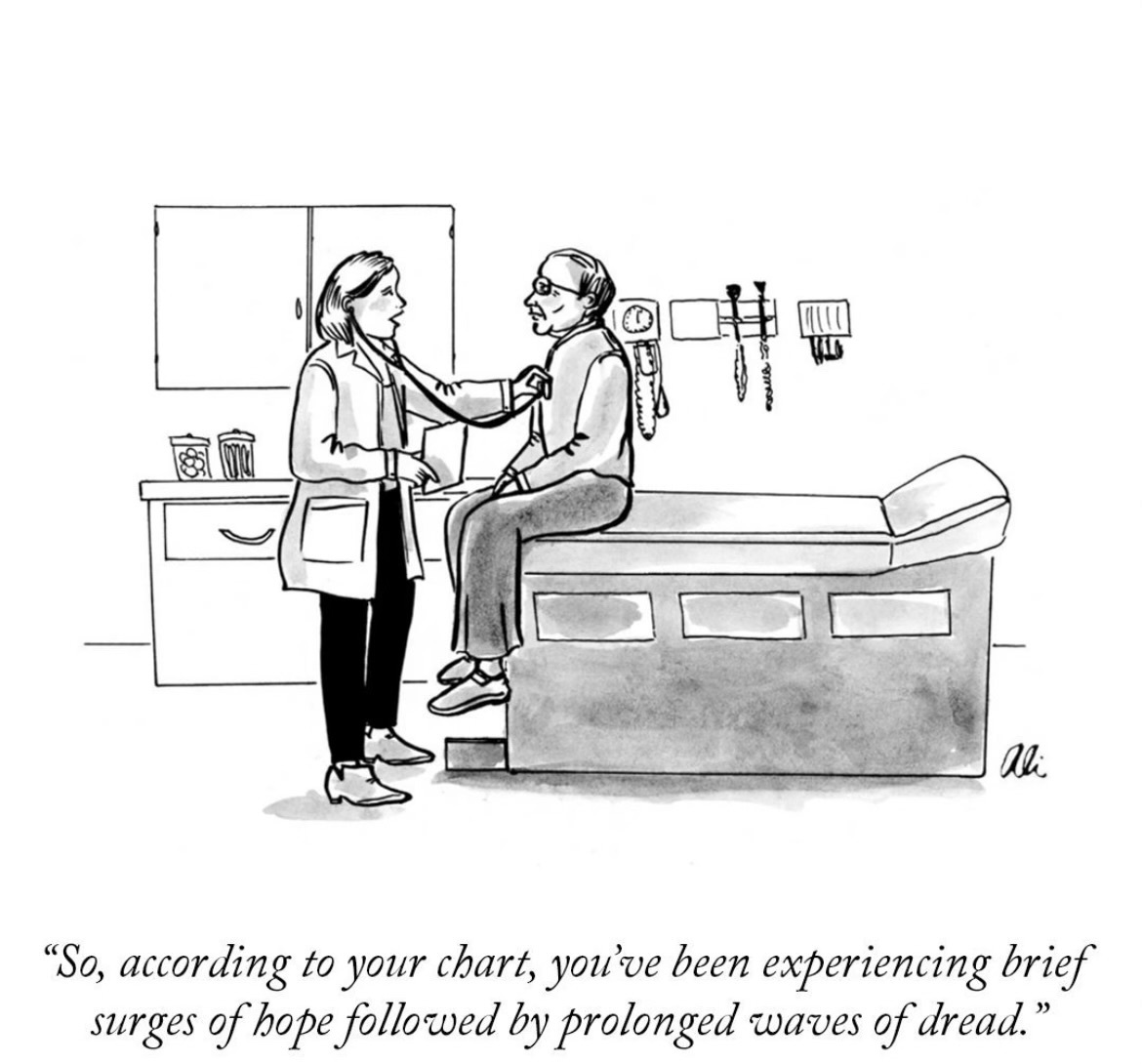