“I got the idea for Netflix after my company was acquired. I had a big late fee for Apollo 13. It was six weeks late and I owed the video store $40. I had misplaced the cassette. It was all my fault.” — Reed Hastings

Good Morning & Happy Friday! For a short week there sure has been plenty of action. The Russia-Ukraine conflict officially escalated past the possibility of a peaceful resolution with bombing raids, gunfire, and multiple deaths reported throughout Ukraine. Our thoughts go out to all those affected, and we sincerely hope that the situation deescalates quickly, with minimal damage and loss of life.

On the home front, President Biden's response to Russia with sanctions gave the market a little bounce after a brutal start. The playbook for these situations isn't a set of rules, but more so possibilities, so we'll have to wait and see how it all shakes out. One thing that is certain is that "Pharma Bro" Martin Shkreli is banned for life from roles at public companies, his second lifetime ban after one from the pharmaceutical industry. Elon Musk and the SEC are butting heads again, with the SEC probing trades made by Musk and his brother, when Elon let a Twitter poll decide whether to sell stock or not. Finally, as people look for jobs, Amazon opened the first Whole Foods with cashierless tech. Rumor has it the soundtrack in the store will be just DJ Unk's old hit telling you to just, "Walk It Out."

ICYMI: 📢 We have a lot of exciting stuff planned for y'all this year and one of the things we are close to launching is a Short Squeez Premium membership. Before we do, we want to hear what will be most valuable to you. Please take 30 seconds to fill out this survey. We'll be sending our favorite book to 5 lucky winners who fill it out. Note the premium membership is separate from this daily newsletter, which will always remain 100% free.

If you are a Web3 VC/investor, please email us, we have an interesting opportunity for you. 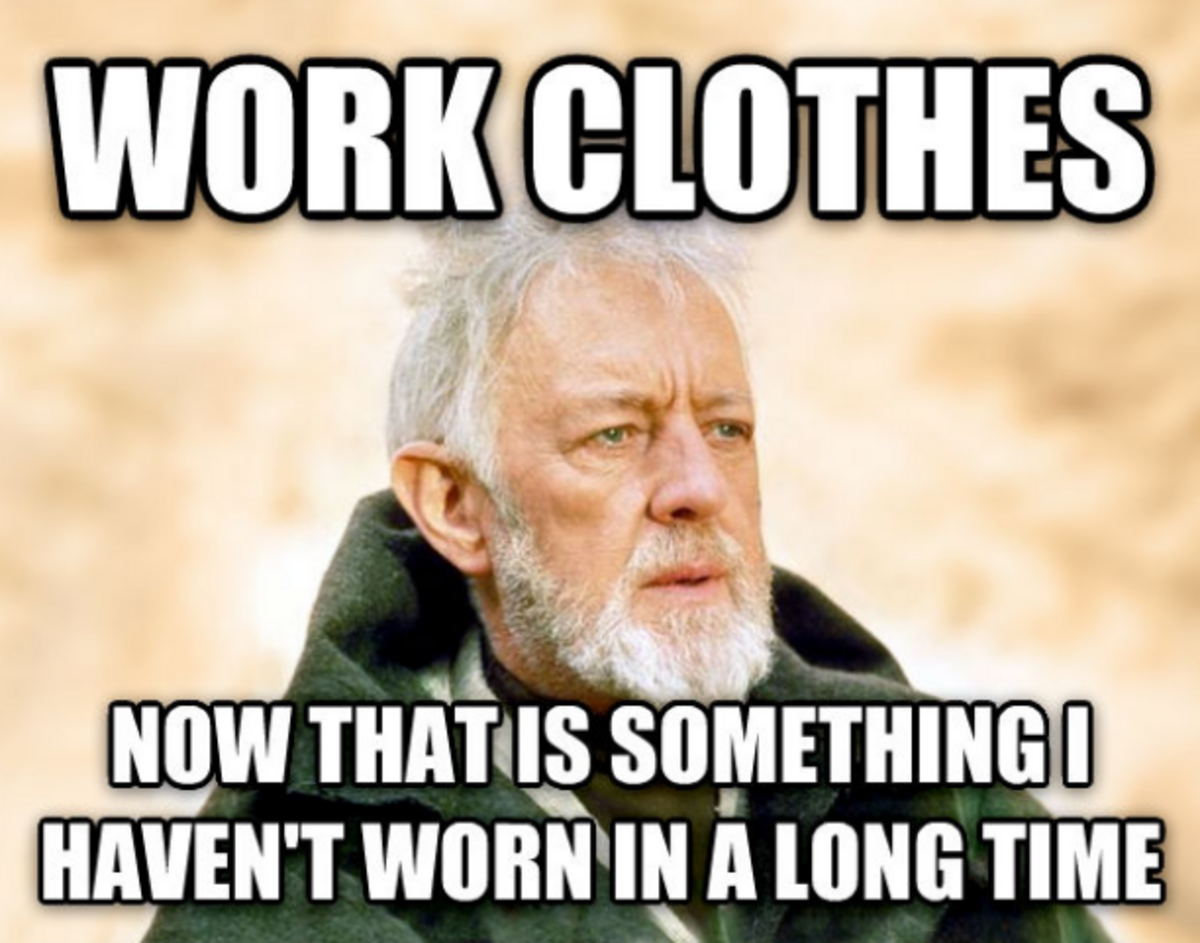 The pandemic forced the hands of millions of Americans and sent them out to pasture (career-wise) into early retirement. But retirees are seemingly unretiring now, and they're doing so at levels that we haven't seen since before the pandemic.

This is good news for the economy since labor supply will increase, which is beneficial to a number of companies having a hard time hiring.

Nick Bunker, economics research director at Indeed.com said, "Continued strong demand for workers, and vaccinations, are allowing folks to step back into the workplace." Specifically, 2.8% of workers who said they had retired by Jan 2021, got back into the labor force by Jan 2022. Those numbers have been showing a solid upward trend since the second half of 2021, even despite headwinds like Omicron.

The reasons for people getting back to work vary. Some people probably just hate watching daytime television or don't have anyone to golf with on a Tuesday at 9 AM. Others simply just need to make more money. Kathy Jones of Schwab Center for Financial Research, said, "We often think of retirement as people get social security and go on their merry way, the vast majority of Americans need to supplement their income."

Short Squeez Takeaway: We've finally found people to fill those entry level positions that are seeking candidates with 20+ years of experience. Retirees often end up taking jobs to remain social or earn a little extra cash. The office-types might return to old firms in part-time roles or as advisors. Those without corporate resumes take gigs at places like Home Depot and may become greeters. So next time a wrinkly face smiles and says, "Hello there," say it back because they may not want to be at a Walmart either.

Markets rebounded from early losses after Biden's speech about additional sanctions against Russia, leading people to believe that things like high oil prices won't affect Americans as much as they thought.

A Message from Polymarket: Truth Social to Stay #1?

Truth Social, the social network backed by former President Donald Trump, hit the top of the iOS App Store download rankings for free apps a little over 12 hours after it debuted.

Trump’s Truth Social launched about a year after the twice-impeached US president was permanently banned from Twitter and several other mainstream internet platforms due to his role in the attack on the US Capitol on January 6, 2021.

As of this writing, Truth Social is still the highest-ranking free app on the App Store in the US, but will it be able to stay there for long?

Will Truth Social be the #1 Social Networking App in the US Apple App Store on March 6?* 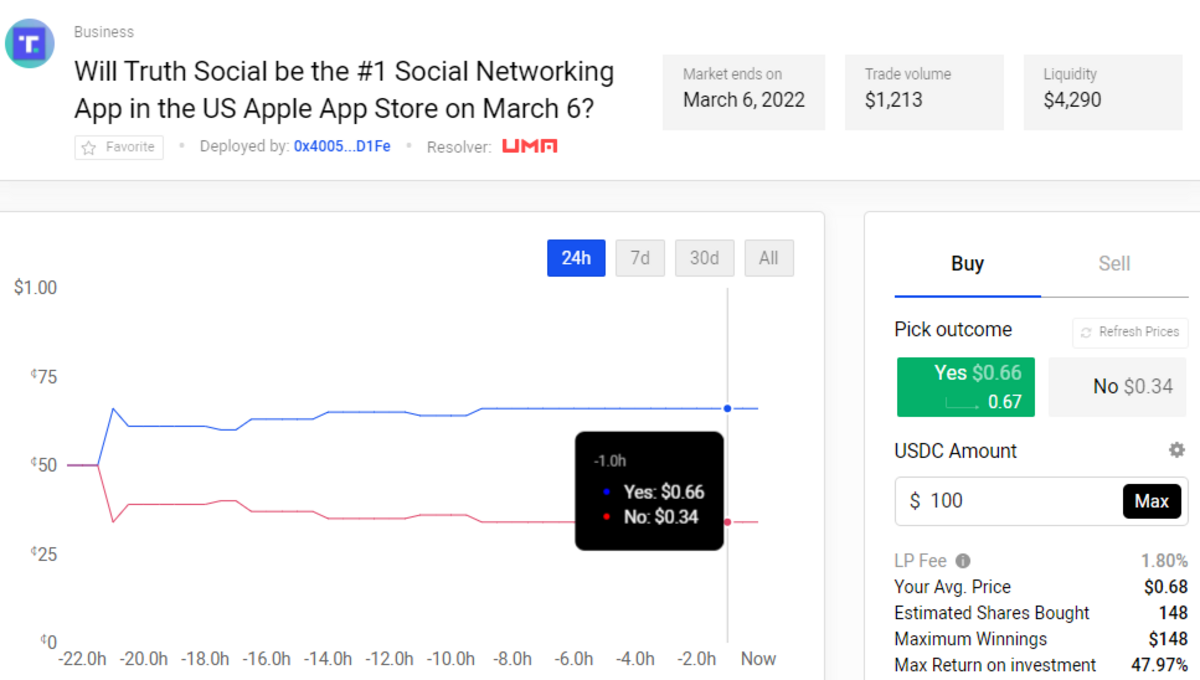 Polymarket traders are currently pricing a 68% probability that Truth Social will be #1 in the US Apple App store on March 6. What do y’all think? Follow the odds now on Polymarket!

4. Book of the Day: The Cryptopians: Idealism, Greed, Lies, and the Making of the First Big Cryptocurrency Craze 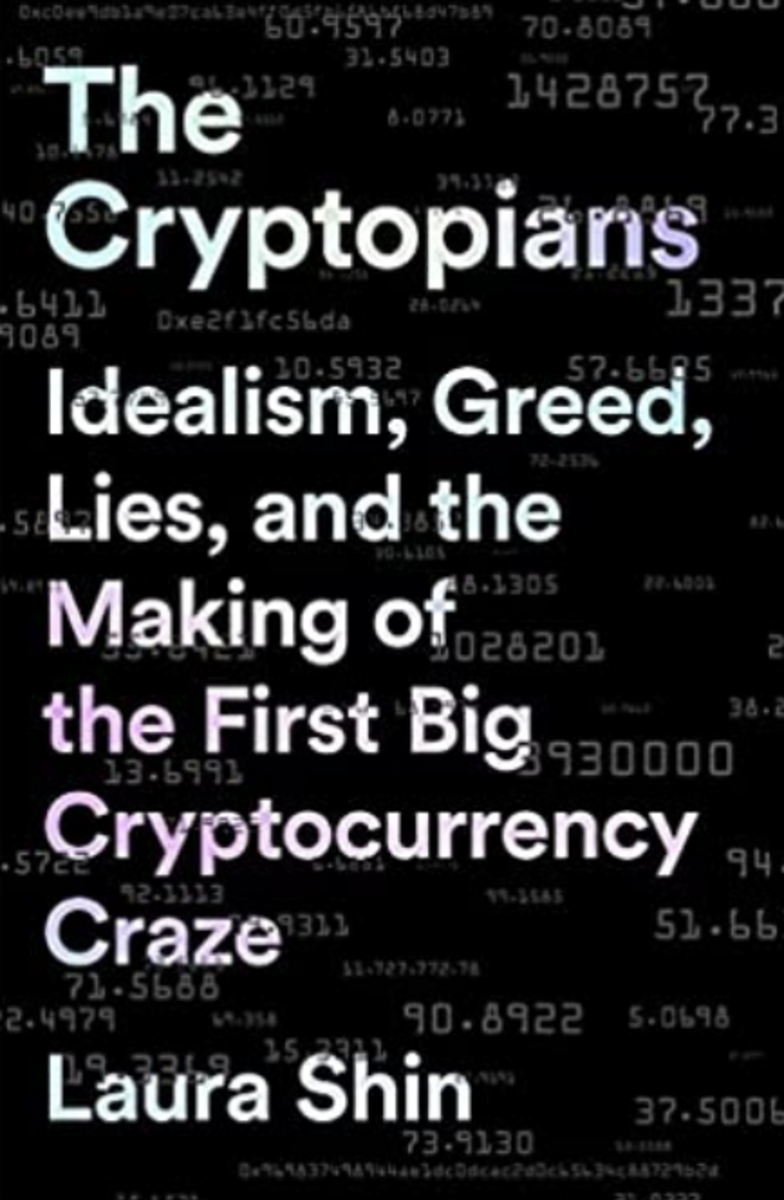 In their short history, Bitcoin and other cryptocurrencies have gone through booms, busts, recently reaching a market valuation of more than $2 trillion. The central promise of crypto endures—vast fortunes made from decentralized networks not controlled by any single entity and not yet regulated by many governments.

The recent growth of crypto would have been all but impossible if not for a brilliant young man named Vitalik Buterin and his creation: Ethereum. In this book, Laura Shin takes readers inside the founding of this novel cryptocurrency network, which enabled users to launch their own new coins, thus creating a new crypto fever.

She introduces readers to larger-than-life characters like Buterin, the Web3 wunderkind; his short-lived CEO, Charles Hoskinson; and Joe Lubin, a former Goldman Sachs VP who became one of crypto’s most well-known billionaires. Sparks fly as these outsized personalities fight for their piece of a seemingly limitless new business opportunity.

This fascinating book shows the crypto market for what it really is: a deeply personal struggle to influence the coming revolution in money, culture, and power.

“Usually, I don’t trade crypto, but when I do, I lose everything.”

Taken from the Freedom in the World index, 2022 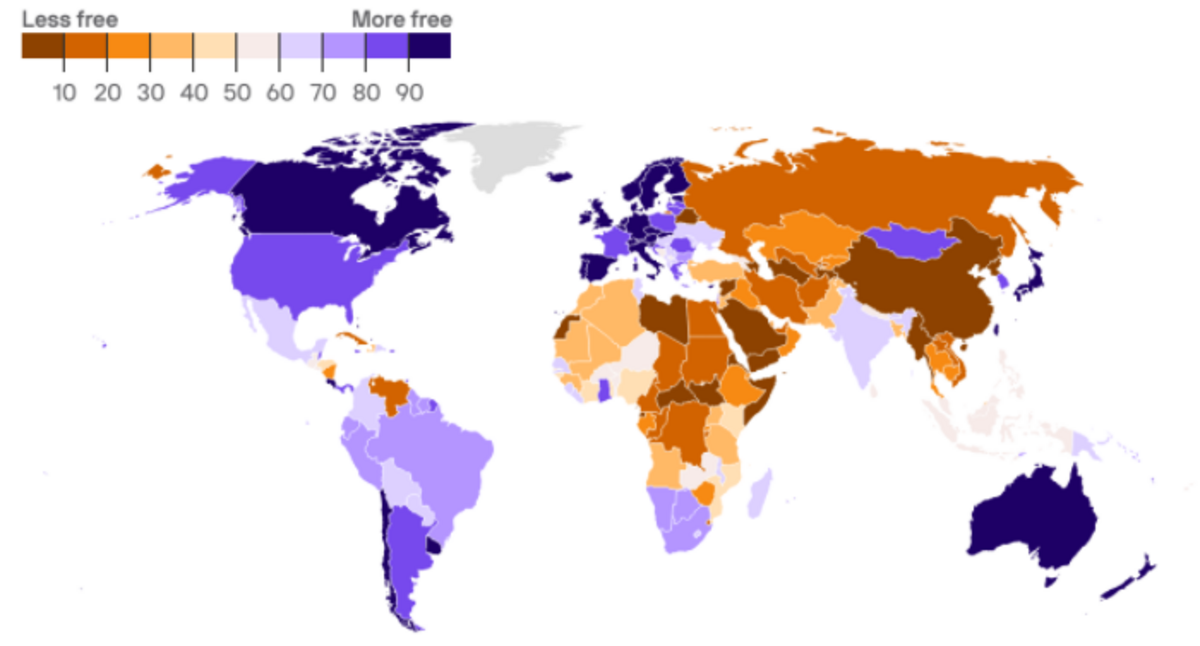 Investing in uncertain times is almost always more profitable than investing when everything seems certain.

Investors, like most people going about their daily lives, don’t like doubts and uncertainties – like the Covid-19 pandemic, or the Russia-Ukraine crisis. So, we would do anything we can to avoid it.

In fact, uncertainties are the most fundamental condition of the investing world.

“Most investors strive fruitlessly for certainty and precision, avoiding situations in which information is difficult to obtain. Yet high uncertainty is frequently accompanied by low prices. By the time the uncertainty is resolved, prices are likely to have risen.

Investors frequently benefit from making investment decisions with less than perfect knowledge and are well rewarded for bearing the risk of uncertainty. The time other investors spend delving into the last unanswered detail may cost them the chance to buy in at prices so low that they offer a margin of safety despite the incomplete information.”

What Klarman suggests is that if you need reassurance and certainty, you’re giving up quite a bit to get it. Like high fees to experts who would predict the future (which you falsely believe as certainty, which it isn’t), or expensive prices for stocks (because everyone knows their future is clear, which often isn’t).

On the other hand, if you can get in the habit of seeking out uncertainty, you’ll have developed a great instinct. Plus, in the long term, it’s highly profitable. 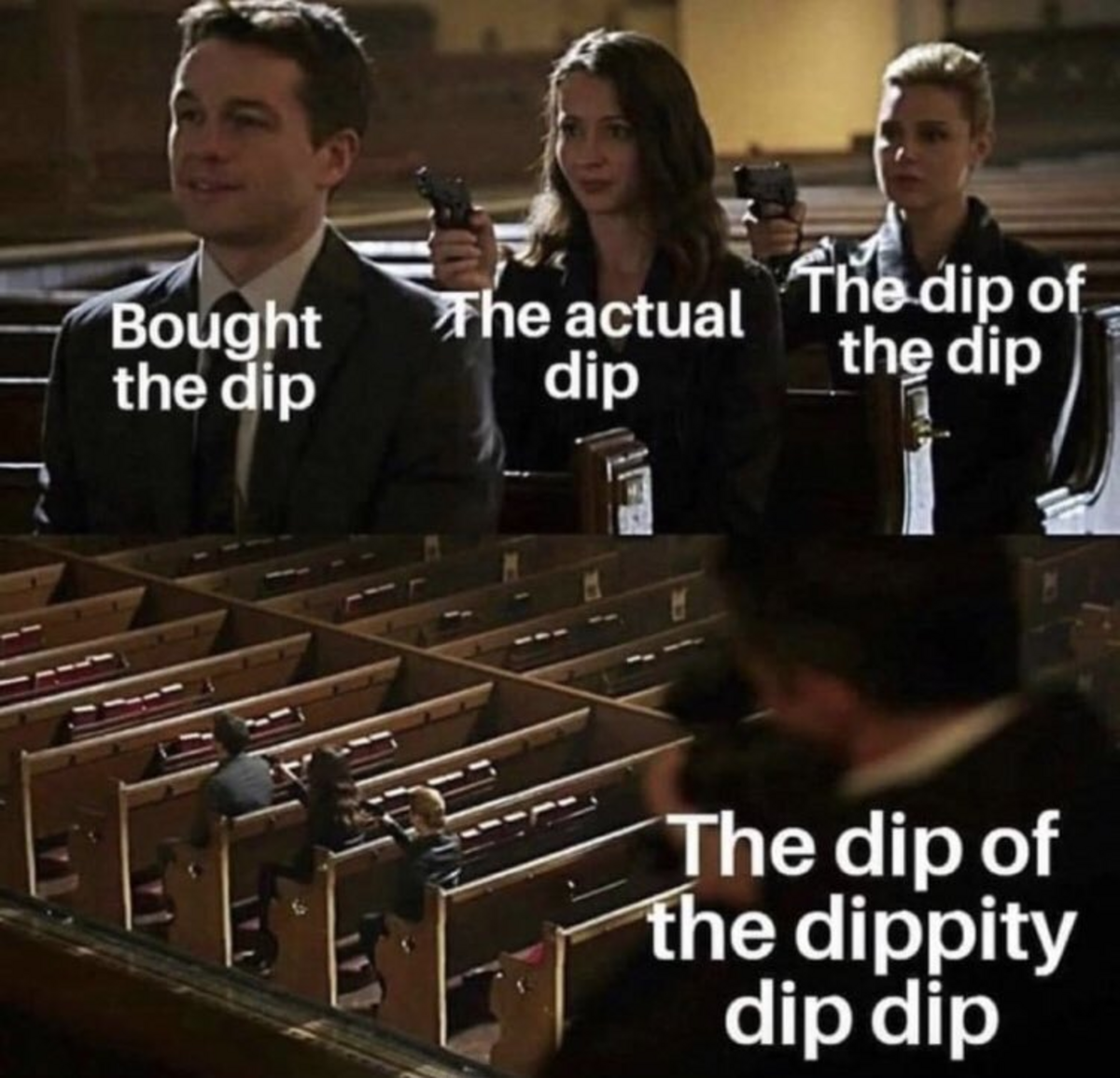 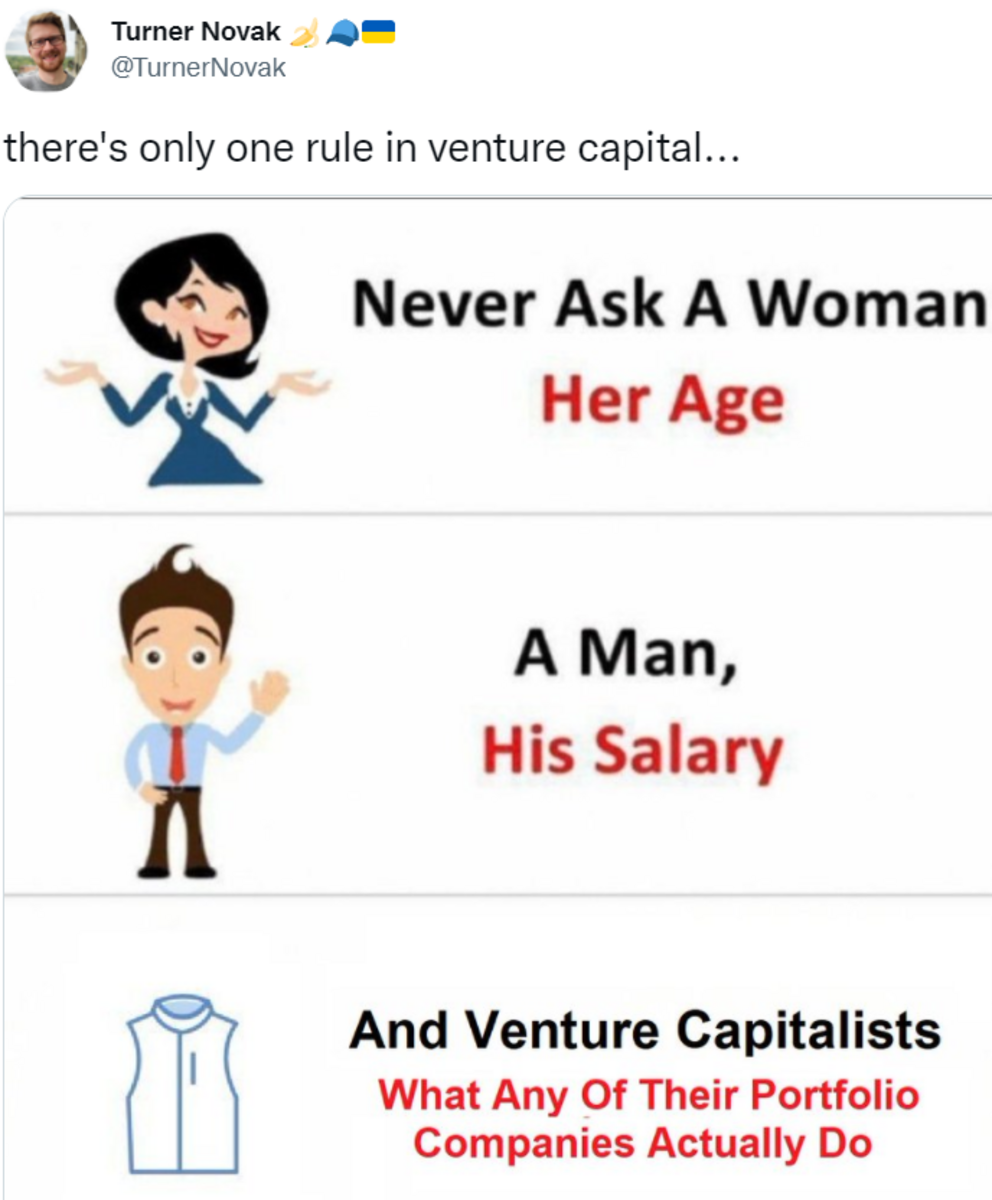 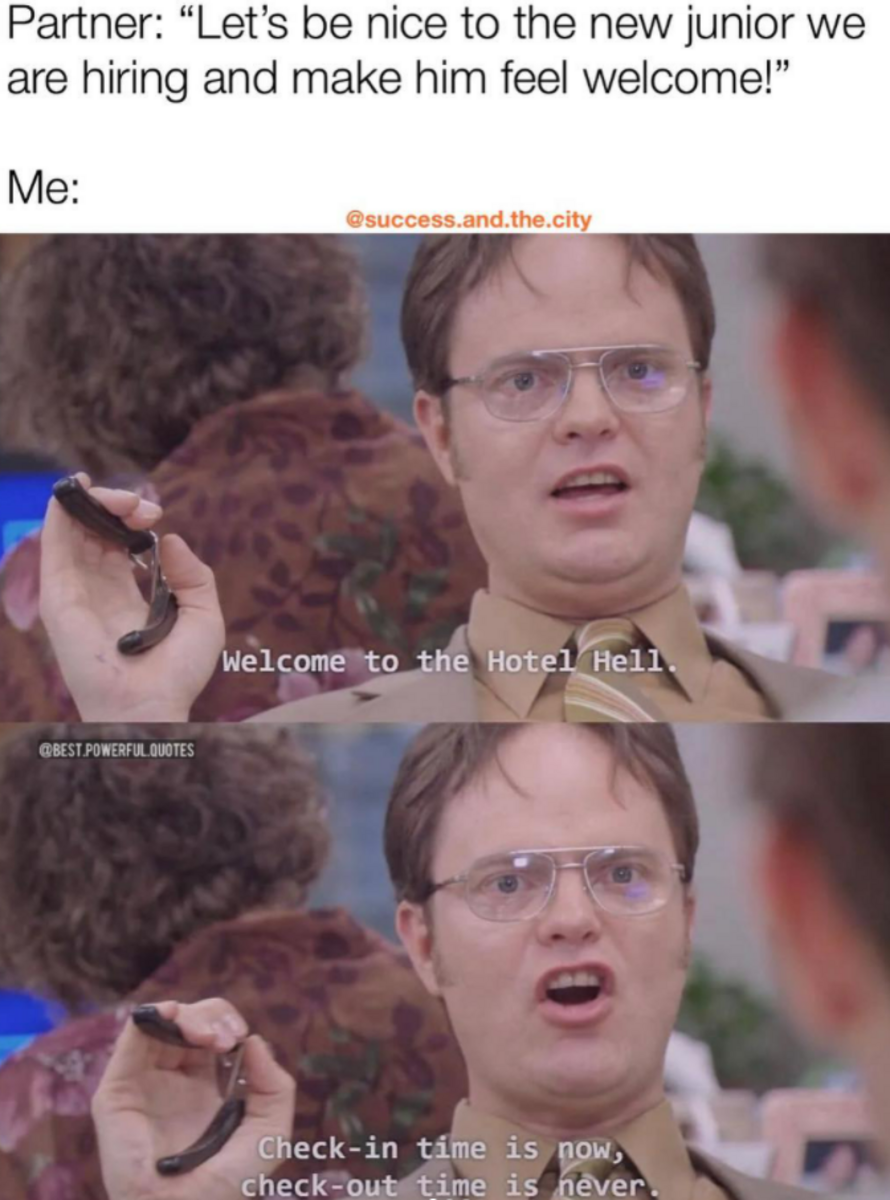